Federal jury convicts man on attempted enticement of a minor

BATON ROUGE – A federal grand jury has convicted a Livingston man and charged him with the attempted enticement of a minor.

On Thursday, the Department of Justice announced that a four-day trial centered around the actions of 45-year-old Jonathan Francis Kimbrell in connection with an undercover bust resulted in a guilty verdict for Kimbrell.

During the trial, evidence presented indicated that Kimbrell communicated online with two undercover FBI agents who he believed were an 11-year-old girl, her stepfather, and her mother.

But these three ‘individuals’ were characters portrayed by undercover FBI agents.

According to the Department of Justice, during these online discussions, Kimbrell was led to believe the ‘stepfather’ had been repeatedly molesting the ‘stepdaughter.’

Kimbrell’s reaction was to try and convince the ‘stepfather,’ ‘mother,’ and ’11-year-old’ that he should join in molesting the child.

Hundreds of emails were exchanged between the undercover agents and Kimbrell, and in many of these exchanges Kimbrell graphically described the ways in which he would have sex with the ’11-year-old.’

Eventually, Kimbrell arranged to meet with the ‘family’ at a restaurant. Kimbrell was told the ‘parents’ would be in the restaurant while the 11-year-old waited in a nearby motel room located just across the restaurant’s parking lot.

Officials say at this meeting as Kimbrell left the restaurant and began walking across the parking lot, towards the motel, FBI agents arrested him.

When he was arrested, agents found that he was in possession of two boxes of condoms, lubricant, baby oil, and a gift he’d purchased for the ’11-year-old.’

After hearing this and all relevant evidence, a federal jury found Kimbrell guilty and as a result of his conviction, he will be required to serve a yet-to-be-decided amount of time behind bars (at least ten years), pay a fine of $250,000, and remain under supervised release for no less than five years (and up to life).

Kimbrell will also be subject to federal and state sex offender registration requirements, which will apply throughout his life.

Bryan Vorndran, FBI New Orleans Special Agent in Charge commented on the case, saying, “Protecting children against predators is paramount. The FBI’s Baton Rouge Crimes Against Children and Human Trafficking Task Force intercepted Jonathan Kimbrell while he was en route to meet an
11-year old child for the purposes of engaging in sex.”

“The men and women of the FBI New Orleans Field Office will continue to aggressively pursue those who attempt to harm and exploit children.” 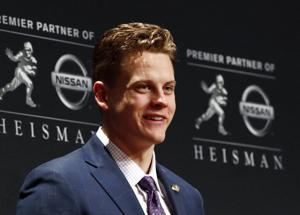 The Advocate 2 months ago

Joe Burrow’s dream season at LSU continues. The owner of a Heisman Trophy and the unquestioned leader of the No. 1 seed in the College Football Playoff, Burrow now... Read More

Photo: The Guardian News BATON ROUGE, LA— The NeuroMedical Center Rehabilitation Hospital is teaming up with ‘Dance for PD’ to kick off a series of free dance classes for... Read More

BALTIMORE (AP) — Seven people were found suffering from gunshot wounds when officers responded Sunday to a report of a shooting, the Baltimore Police Department and news reports said.... Read More

BATON ROUGE- Authorities are on the scene of a deadly crash on Airline Highway and Seigen Lane involving a bicyclist.  The crash happened around 3 p.m. Saturday. Authorities report... Read More